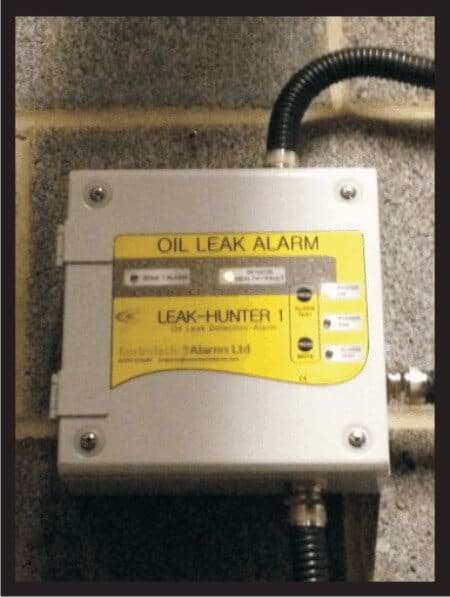 To protect the basement area in a large commercial office building in central London. The client was an international specialist consultancy providing integrated services and facilities management. As part of their facilities management portfolio they offer their clients a service to maintain safe and risk adverse environments, this oil leak detection project formed part of this service.

The basement houses 2 very large backup generators and a diesel fuel tank. An early warning system was required to alert that a leak has occurred either from the tank or the connecting pipes needed to be fitted. A trench had been fabricated in to the floor of the basement in which the pipework ran.

The probes supplied for oil leak detection use a clever optical technology that’s capable of detecting a wide range of different liquids. These include refined and unrefined oils, pure water and some acids to name but a few.

Installation took place out of hours as any drilling during the working day would be disruptive. The panel was mounted on a wall in the basement and power provided via a 230VAC fused spur. A connection cable (supplied) between the panel and the first sensor position was routed through containment. The first sensor was connected and the connection cable then run from this point to the next sensor. This process was repeated until 5 sensors had been connected in series. A slight amendment to the sensors took place during manufacturing that allowed the actual sensing element to sit underneath the sensor housing. This allowed the sensors to be low profile and more suited to being installed in the trench where the pipes ran.

Once installation had been completed and everything had been checked through the system was powered up. Tests were made on each of the 5 sensors to ensure that should a leak occur the alarm panel would trigger an audible and visual signal. A connection to the BMS was made using one of the volt free relays in the alarm panel. This connection and the resulting BMS reaction was also tested.